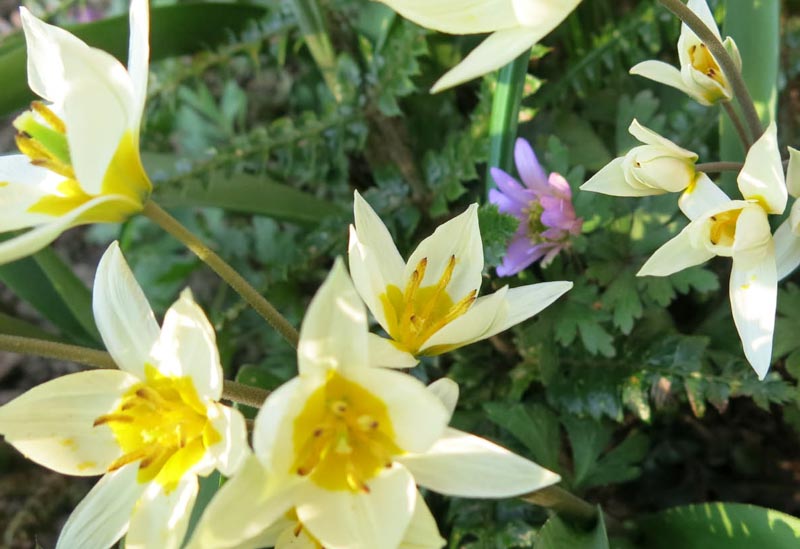 The first few of probably a very few snowflakes are falling – this is the perfect moment to get dreamy about what’s going to be in the garden in just a few months’ time. Already, little Iris reticulata ‘Katharine Hodgkin’ has pushed her way out into the daylight, her murky washed-out yellow and sea-greeny blues strangely uplifting. I would never think of putting these colours together in a garden, in a room, in an outfit, but this tiny flower challenges all that you think you’re going to like and makes you realise instead that Nature has Done It Again. She’ll soon, if he decides to co-operate, be joined by Iris histroides ‘George’, whose rich purple petals form a much better backdrop for Katharine Hodgkin than the current bare earth.

This is a new garden: at the moment there are few other blooms to join the irises and snowdrops. So my thoughts turn instead to what’s in store, and for me, one of the most exciting treats is, in theory, going to be the many roses I planted some weeks ago. Some of them are old friends and favourites: ever since we identified  a glorious rose tumbling over an archway in a rented cottage as Adelaide d’Orleans, I’ve planted one wherever and whenever I can. White, slightly pink, slightly cream – it all depends on the light, but she is the perfect, perfect partner for an arch or a pergola. The blooms are simple and understandable – a rose that would be blowsy if she didn’t have that special refinement, that je ne sais quoi. I reckon if she were a rose, this is the rose that Helen Mirren would be.

Other old friends are here: Zephirine Drouhin, first brought to my attention by Deborah Kellaway in her rather excellent but somewhat forgotten ‘The Making of an English Country Garden’. The author worried that the ‘meh’ pink was a little too strong against the pale wall she had put it against, but as a rose tolerant of a north-facing wall, it is just the thing for my front door. A great scent makes up for the frothy untidiness of the flower, although I do like a bit of mayhem in a flower.

Charles de Mills. Who could resist Charles de Mills? Deep deep deep rich rich red exquisite flowers look as if Takeshi Saji has come along and sliced them in half. This rose looks glorious  when slightly veiled by Agastache ‘Black Adder’. If this rose were a person, he’d simply be Charles de Mills.

Fragrance is a must with a rose. And what better fragrance than that of Ispahan? Its soul-stirring scent leaves you in no doubt that it is a Damask. I’ve left room to train this rose around four tall sturdy stakes, to create a mass of blooms from the ground up. Think crinolines: the explosion of soft pink and a few wayward shoots will hide the disciplined framework beneath.

Newcomers include Creme de la Creme, to test myself to see if I’ll be able to stand its yellow tints against the pinks which it will stand against. I once heard somebody say in a lecture that pink and yellow are unspeakable together in the garden. This sort of sweeping statement always makes me sit up and listen, and to make a mental note to try to prove it wrong. We’ll see……