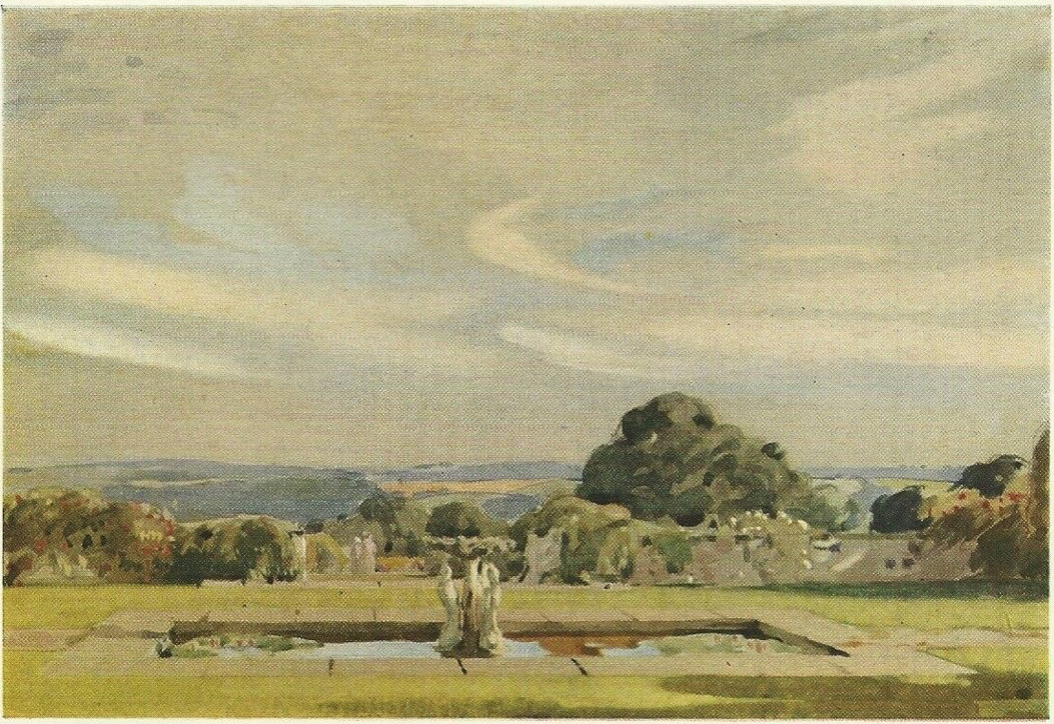 Jo Thompson Landscape & Garden Design were delighted to be asked to restore a garden by the great garden designer Percy Cane.

We were delighted to be contacted by the garden historian Jill Sinclair about our work in restoring a garden by the great designer Percy Cane. He had become rather forgotten, but there are encouraging signs of a revival of interest, with Tom Stuart-Smith recently restoring much of his work at Hascombe Court and Dan Pearson working at Dartington. Meantime, the National Trust for Scotland is busy replanting much of Falkland Palace.

We have a passion for research into a garden’s history, and it was fascinating to compare our findings with Jill’s, and to contribute to her research.

To the south of the main entrance to Sharnden house stone flags lead between low random-coursed stone piers with narrow double-leaf wrought iron gates in a 1m high wall to a terrace on the south front with views over surrounding countryside. Directly south of the gates, steps (now, 2004, in poor condition and with self-seeded plants) lead down to lower lawns (now bisected by the drive to Lower Sharnden). On the west side of the south terrace is a ruined conservatory, whilst at the east end, brick steps with stone retaining walls give access to an upper lawn with views across the lake and woods below. Centred on the south garden front door, a wide flight of shallow stone steps with stone retaining walls (with rock plants, Virginia creeper and wisteria) descends south towards lower lawns, the stone flags then continuing east to become a c300m paved terraced walk (now in divided ownership) described in the 1924 Studio article and contemporary illustrations. The first 40m of the paved walk is bordered by low walls with stone capping (now, 2004, under repair) and then descends by a series of steps to an entrance to the terrace gardens (now, 2004, blocked by a temporary wood and wire fence and the sundial from the 1920s sundial garden).

Along the top of three terrace levels a 180m paved walk is bordered by grass and narrow flower borders below balustrade walls.  Beyond the walls on the north, the southern end of a lake, shown in the 1926 Sales Particulars as a lily pool is now, 2004, overgrown. On the east side of the lake, an entrance to Percy Cane’s upper glades remains framed by groups of native trees (including maple and beech) with an understorey of rhododendrons. On the south side of the paved walk views give onto the site of the 1920s rose garden on a terrace below and the countryside beyond. The walk descends by stone steps to a rectangular area c40m x 50m, the midpoint of the terrace gardens walk, a pool with eagle statue and stone flag surrounds forming the central feature. The paved walk then continues east as a lavender walk with standard roses, terminating in a late C20 wooden arch that leads to informal glades and the site of former tennis and croquet lawns (1935 Sales Particulars), sheltered by mature trees and shrubs.

On the south end of the north-south axis with the pool, steps (now, 2004, in poor repair and self-seeded with ferns and cotoneaster) lead to the site of the 1920s rose garden still enclosed by topiary and yew hedges. The garden’s crazy paving circular path and arc-shaped rose beds (shown in contemporary illustrations) have been replaced by lawn. Adjacent to the former rose garden on the east, Lower Sharnden is accessed along a tarmacadam drive from the west (with Victorian style lampposts), which has replaced the west-east path of Cane’s rose bed.  Along the drive, borders contain herbaceous planting and a recessed seating area in the north retaining wall (1935 Sales Particulars) is, 2004, hidden behind an overgrown rhododendron. From the former rose garden a path leads south to steps down to a paved garden on the lowest terrace. Similar steps descend from the south front of Lower Sharnden, a recessed circular pool built into the north retaining wall forming a central point. The quadripartite design of the paved garden with central rectangular pool survives (illustrated in the 1920s and 1930s as planted with rock plants and small shrubs), but is now, 2004, partly hidden beneath a profusion of mature acers, azaleas and flowering shrubs. Bastions with integral seating (now, 2004, in poor condition with self-seeded ferns and other plants) on the south-west and south-east corners of the paved garden give views over informal glades and woodlands below, accessed by two flights of steps.

Steps (now, 2004, with grey-painted metal rail on the east side)from the south-west of the terraced garden leadto guest accommodation set on a level platform (with empty swimming pool below the building) with views over the surrounding fields and woodland. Glades with wide grassed walks between mature shrub and tree plantings (including Lebanon and blue cedars and redwoods) enclose the garden on the south-east, east and north-east.  To the north-east, the glades border the main section of the lily pool, steps and retaining rockery walls (now, 2004, in poor condition) rising on the west side to the upper lawn.

The C19 trapezium-shaped kitchen garden,brick walled on the west and south sides, is located 120m south-west of the main house of Sharnden to the west of the entrance drive.  The north side is bounded by a pond edge (on which are the remains of a C19 wind turbine for lifting water) and the east side by a hedge along a track to the C15 manor house. Shown on the 1sted OS map as partly orchard, by 1935 the garden was described as ‘well-stocked with fruit trees, and containing a range of heated glasshouses comprising:- vinery, tomato house, flower, fig and melon houses’. The kitchen garden is now part of the gatehouse property, the glasshouses no longer exist (2004) and the ground is cultivated as an ornamental, vegetable and fruit garden.